AMATI | Talks with the Mediation Institute of Ireland

Home/News/AMATI | Talks with the Mediation Institute of Ireland
Previous

AMATI | Talks with the Mediation Institute of Ireland

Andrew Goodman and Richard Jackson this week had talks in Dublin with Gerry Rooney, President, and Sabine Walsh, President-elect, of the Mediators’ Institute of Ireland about co-operation in the benchmarking and delivery of framework standards for mediation trainers and assessors. After visiting the MII offices to discuss the MII Quality Assurance Framework, a presentation was given to 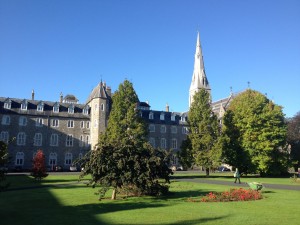 AMATI by the senior courts officer at the Dublin Circuit and District Civil Courts Office on the present court initiatives in family and civil mediation. The trip concluded with a meeting at the Edward M Kennedy Institute for Conflict Intervention and the National University of Ireland, Maynooth, with Executive Director, Peter Cassells, and Project Manager Dr Kieran Doyle.

About the Author: admin